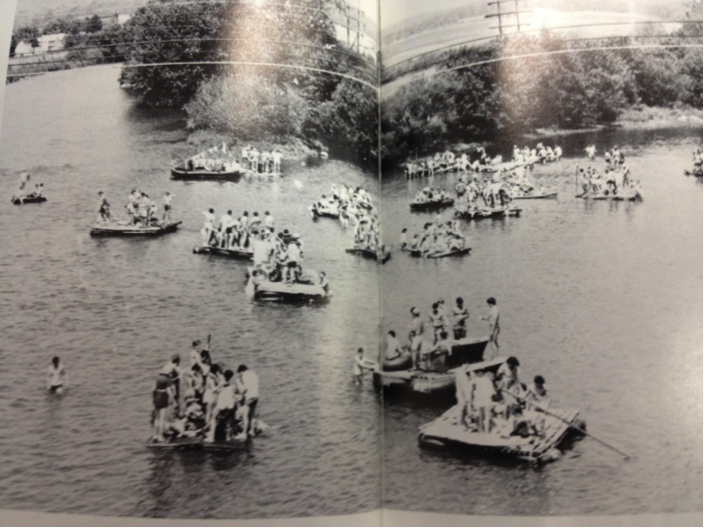 Among the traditions of Juniata College that have since passed into history, few seem quite so ridiculous or entertaining as the Raft Regatta. Usually performed on a Saturday in late spring, the Raft Regatta was an annual event open to any students who wished to participate. Although not officially sponsored by Juniata College, the event enjoyed considerable popularity with rafters and spectators alike. The Raft Regatta began in 1971 and started as a social gathering for a few friends, but the event quickly gained notoriety and spectators turned out to watch the expedition down the Juniata River.

Raft construction usually took place on the day of the Regatta and students used all manner of material to build a craft worthy of the Juniata River. Most students built their rafts on the North Lawn, in front of Sunderland Dormitory with no testing or regulations to restrain their imagination. Originally the most common items used to build the rafts were loading dock pallets and inflatable inner tubes. The pallets provided a suitable surface to serve as a deck, and the tubes provided mostly adequate buoyancy for the rafters. Unsurprisingly, due to poor construction or piloting many rafts sank and their occupants were tossed into the flowing Juniata. Some raft architecture branched out from the typical wood and rubber blueprint, with the more creative rafters using anything in sight to build a successful and comfortable raft. Almost all rafts merely floated down the river, but some were powered by paddle wheels turned by stripped out bicycles or objects that could act as a paddle or oar. Particularly ambitious students added sofas, chairs, and even on one occasion, an outhouse to their rafts.

Victory in the Raft Regatta was achieved through sheer speed, as the first to reach the finish line took home the honors, but creativity, construction, and themes also factored into the decision. A panel of students in canoes who accompanied the rafters on their journey served as judges. According to the 1985 Alfarata yearbook, “The rafts were judged on position, 150 points for the first place,” with up to fifty points being awarded for construction and theme each. The winning time in 1985 was two hours and twenty minutes. The prize for the winners of the Regatta changed through the years, but in 1985 the first place prize was $100.

One of the most notable aspects of the Raft Regatta was the widespread consumption of alcohol by rafters and spectators alike. The most popular accessory for rafts throughout the years was a keg of beer, but more than one was also common. The Regatta provided the Juniata students a chance to relax and wind down near the end of the academic year. Undoubtedly the event was so popular with students because of the ability to sunbathe, lounge, and get intoxicated while leisurely floating down the Juniata. Bad weather or high water almost perennially delayed the regatta, but the event enjoyed such popularity that most of the college turned out to watch the preposterous procession.

To fill the void of the spring student-run party, a group of students started a new Juniata tradition to replace the Raft Regatta, Pig Roast in 1986. Pig Roast is run by the River Rats rugby team, and fulfills the legacy of ridiculous fun for Juniata students that the Raft Regatta perfected.