Mountain Day is an unannounced day each fall when classes are cancelled and students and faculty leave campus for a day of fun. It is Juniata College’s oldest continuing tradition, since the first all-college outing occurred in 1896.[1] Its origins hail from a supposed smallpox outbreak in Huntingdon in the winter of 1877. While there is speculation that this smallpox epidemic was, in fact, a particularly severe strain of chicken-pox, the exaggeration of rumors instilled fear on campus and in the surrounding community. One man remarked to David Emmert, an early faculty member, upon realizing he had come from Huntingdon, “They say hundreds of people are down with the disease out there and scores are dying!”[2] Juniata College, founded in 1876, was still in its infancy during the scare, but was also facing the possibility of closing if its students and faculty did not return after this epidemic.

Those students who lived within a convenient distance of the school returned home. However, seven students from Ohio, members of the Zuck-Emmert boarding club, were afraid that going home would mean never returning.[3] The four female "orphans" found homes with private families, but the three remaining boys had nowhere to stay.[4] People in the surrounding areas were so terrified of a smallpox outbreak that women and children hid when people from Huntingdon appeared. Fearing the worst, someone jokingly suggested that the boys go to the mountains, but it reminded Jacob Brumbaugh of "The Forge," in what is now Trough Creek State Park.[5] The three boys spent six weeks in an old house that had recently been occupied by wood-cutters. They continued their studies on a regular schedule, and explored the rugged wilderness, aided by a young Martin Grove Brumbaugh.[6] Classes resumed on February 25, a week later than anticipated, and with a surge of applications to the school for the next year.[7]

All-college outing day, the precursor to Mountain Day, first occurred in May 1896.[8] Students traveled to The Forge to explore the refuge near the creek where the orphans rode out the smallpox epidemic.[9] Students had long heard the orphans' story, and were curious to see how they lived. By 1900, all-college outing day was a regular autumn event, and in 1903 H.B. Brumbaugh officially named the event "Mountain Day," cementing its reputation as an event that students and faculty look forward to every year, except for a brief hiatus during World War II. [10]

The organization of Mountain Day steadily evolved over the years. For some time in the twentieth century, the date for Mountain Day was announced beforehand, but in 1980, it reverted to the original system of a surprise vacation day.[11] This was to ensure that there would be nice weather, and to prevent students and faculty from planning to use it as a catch-up day. Professors complained that this system made scheduling exams difficult, so for a brief period Mountain Day's organizers would announce several possible dates. Still, by the early 1990s, organizers brought back the element of surprise, and the date of Mountain Day has since remained a secret.[12]

While initially Mountain Day meant a trip to The Forge, the tradition soon involved four different locations that rotated, ensuring that every student could have the opportunity to visit the Forge, Greenwood Furnace, Spruce Creek, and Whipple's Dam.[13] This was not always a set rule, and Mountain Day has also been held at Jack's Mountain and Terrace Mountain. From the mid 2000s Mountain Day has consistently taken place at Raystown Lake.

For as long as Mountain Day has been a surprise date, attempting to guess the day of Mountain Day has almost certainly been one as well. Students have been known to call up state park staff and bus companies to inquire about reservations made throughout September and October.[14] They are also willing to take a gamble with their schoolwork; often, believing they know when Mountain Day will be, students will slack off the night before, only to wake up to a normal day of classes and a growing pile of unfinished work.

On Mountain Day, students are woken up by volunteers who run through the hallways of the dorms in the very early hours of the morning, raucously banging on doors, and dropping off information about the day’s events. For professors and students who live off campus, there is a sign-up for to receive a phone call on the morning of Mountain Day. In the past, signs were simply hung in the bathroom, and calls were made to the phones in every room. [15]

The activities of Mountain Day have changed significantly since its beginning at the turn of the twentieth century, while some things have always remained the same. At its advent, on Mountain Day, “everyone ‘took to the woods’ for a long hike in the morning and an afternoon of outdoor games after a bounteous midday meal.”[16] While the retreat into the woods and the catered meal remain the same, the activities of the day have evolved significantly over time. The hike gradually lost its importance, and in general, the schedule of activities allows the students more individual freedom to enjoy the day as they please. Some students would like to just relax, but other traditions were also instated. Every year, students and faculty went head-to-head in a touch football game, and students competed in an egg toss. Still, both of these traditions have faded out as well.[17]

Now, Mountain Day takes place at Raystown Lake. Many students find enjoyment in water sports, such as canoeing and swimming, if the day is warm enough. There are a variety of outdoor activities, including a slip-and-slide, Frisbees, corn-hole, a mechanical bull, and moon-bounces. There are also arts and crafts, and items are raffled off throughout the day. The tug-of-war draws many competitors. There are bouts between each of the classes, and then the victors battle it out with the faculty.  Mountain Day is constantly changing, but one thing about it always stays the same: it is Juniata's most-loved tradition. 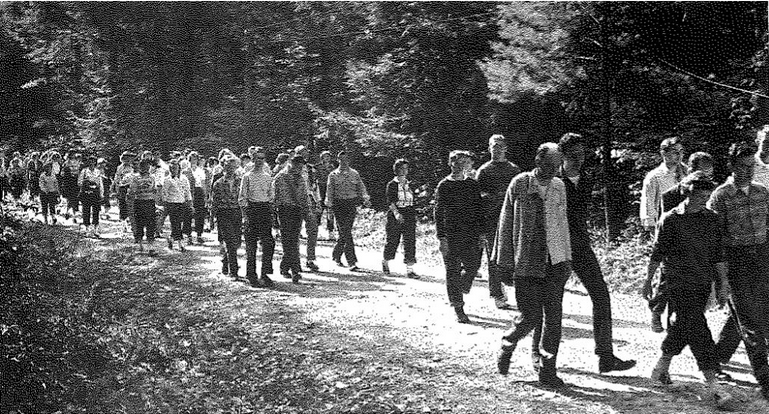 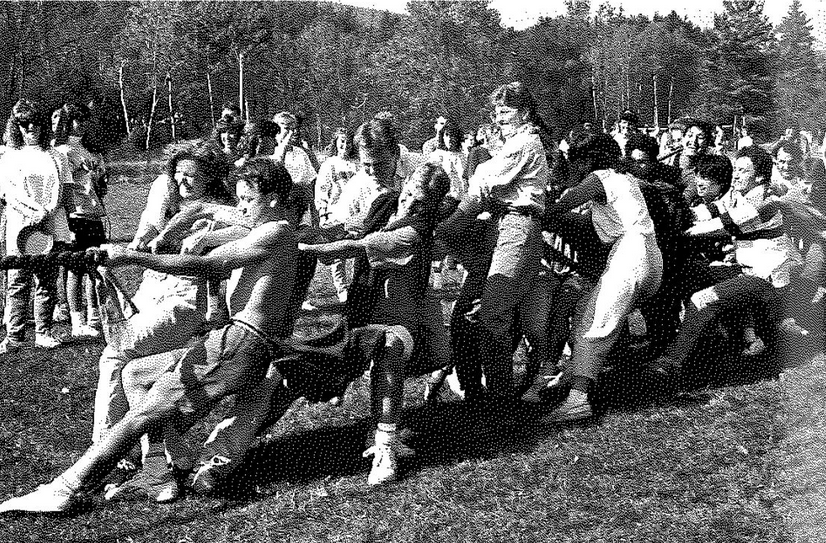 Students participate in a tug-of-war on Mountain Day (Alfarata, 1990.)