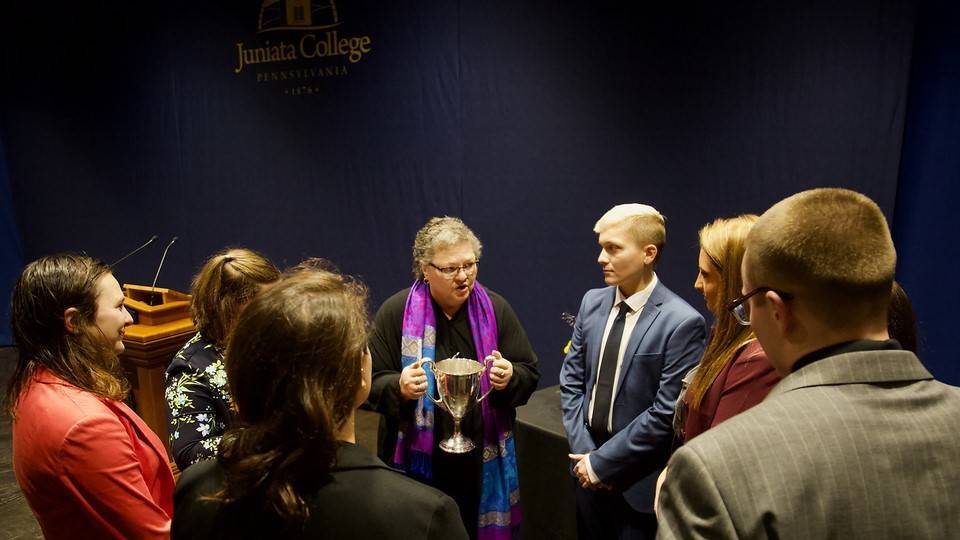 Formal Debates have been an important part of Juniata College student life since 1877. In the early 1900s, speech contests were extremely popular and having cash prizes helped. Juniata College Intercollegiate Prohibition Association held public speaking contests in 1904, but only for their members. The winner of that oratorical contest went to the state competition to represent Juniata. At that time Juniata students dominated the state competition for thirty years. Between the years 1953-1990, the Bailey wasn’t considered a contest but instead it was an award that was given periodically. It was in 1990, during President Robert Neff’s term, that this academic tradition was revitalized and became what we know today. Before 1990, only students in Clayton Briggs and Doris Goering’s public speaking class could participant in the Bailey. This was before Juniata College created the Communication Department and public speaking classes were part of the English Department. President Neff hoped to rebuild the awarding winning Debate Team that existed during the early 1900’s. Realizing how expensive and also how much traveling and weekends go along with having a debate team, the Communication Department chose to focus on the Bailey. With the help of Colonel Sedgley and Elizabeth Thornbury, a substantial budget was established and the Bailey Oratorical Speech Contest was re-opened to all students. Since 1990, the Communication Department has been in charge of the Bailey.

Dr. Donna Weimer, chair of the Communication Department, has oversight of the Bailey Oratorical Contest with the help of her department. The Bailey provides an opportunity for students to be able to speak on current topics that are chosen each year.   For example, the topic for the 2014 Bailey is derived from Martin Luther King Jr’s “I have a Dream” speech commemorating its fiftieth anniversary.

The Bailey Oratorical Contest is still popular today with many students participating from all backgrounds and all POEs. There is a single topic or question presented to the students. The purpose of the speech is to be persuasive and the requirement of the speech is to be between six to eight minutes long. The average number of students range from about forty to fifty who sign up to participate. There is a preliminary round held with three judges, who have some training in public speaking. From the preliminary round seven finalists are chosen to deliver their speech to a new set of judges, often returning alums

The winner receives a monetary prize of $1,000 for first place; second place, $500 and third place, $300. Also, the first place winner’s name is inscribed on the antique Loving Cup displayed in the Ellis Hall lobby. Judge Thomas Bailey’s son-in-law, the Colonel Sedgley Thornbury and his wife Elizabeth Bailey Thornbury contributed to an endowment, which provides a Chair in Communication as well as a scholarship for students. Thomas Thornbury, the son of Sedgley and Elizabeth, continues this tradition of generosity to Juniata students.

Current Winners of the Bailey Oratorical Contest (1990 to Present):