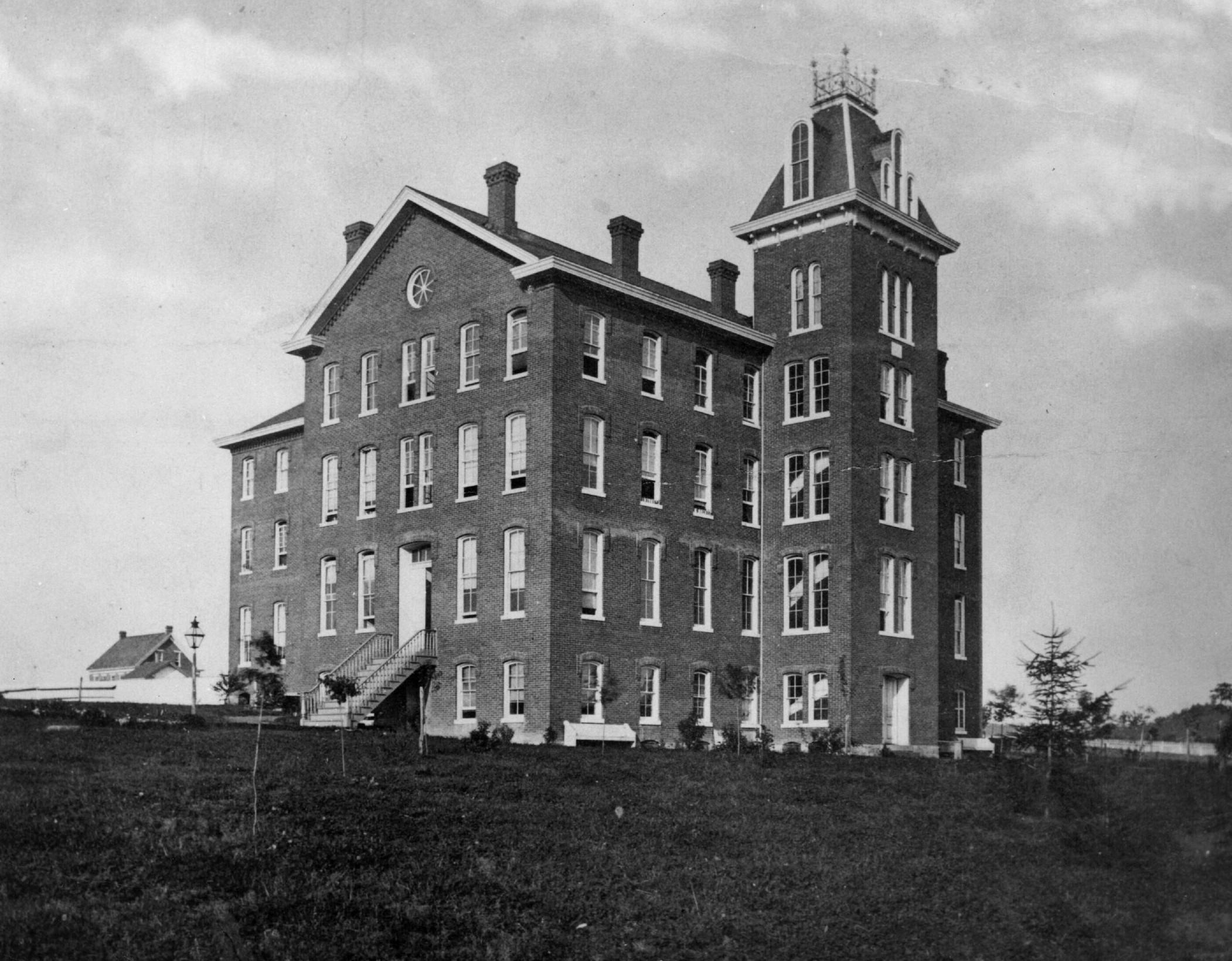 Since the beginning, Founders Hall has been an essential part of the college campus.  This history of Founders Hall began in 1878, when a planning committee was appointed by the Huntingdon Normal School to commission the construction of a new building that would act as the center of the college.  The committee members, including Elder James Quinter, Dr. Andrew B. Brumbaugh and Professor Jacob M. Zuck, secured a three-acre plot of land (donated by the townspeople of Huntingdon) for the building.

To design the building, the committee hired architect S.D. Button of Philadelphia, who was paid seventy-five dollars to design the 84’ x 102’ structure.  Professor Zuck who contributed substantially to the design of Founders said, “We aim at plainness, but do not wish to ignore correct taste or architectural skill and beauty.”  The original building was a simple, four-story, T-shaped structure, which could easily be added onto in the future.  The total construction is estimated to have cost around $11,000 dollars (approximately 2.32 million in today’s dollars).  Built in the center of a three-acre field, Founders Hall, originally just called “The Building,” literally was the campus.  “The Building” was dedicated on April 17, 1879, three years after the college was first established.  It was given the official name Founders Hall in 1897.

During these early years, Founders Hall housed every part of Juniata.  The basement was home to the dining room, kitchen, laundry room, storage facilities and an underground cellar.  The library, parlor, classrooms, and chapel were located on the ground floor.  On the third floor were the women’s dormitories and Zuck’s office, and on the fourth floor were the men’s dormitories.  Each dorm room was furnished with a double bed, table, washstand, bucket, pitcher, basin and two chairs.  Living conditions in the original building were less than ideal, as it lacked both central heating and indoor plumbing.  Besides serving the functions of the college, Founder’s Hall also housed a chapel to be used by the Huntingdon Brethren community.  The space served as a community worship facility from 1879 until the completion of the Stone Church of the Brethren in 1910.

In 1880, central heating was finally installed, and by 1888, the building had indoor plumbing.  Electricity did not arrive until the early 1900s.  By 1888, students began to complain of overcrowding in the building.  These complaints initiated the construction of a 40’ x 100’, four-story annex originally known as Ladies Hall.  Ladies Hall provided the college with extra dormitory space to house the expanding student population.  Oneida Hall was added to the south end of Ladies Hall in 1898.  In 1892, the college built a baptismal pool near the South East corner of Ladies Hall.  The “yard pool”, as it was informally called, was used by the Brethren for religious baptismal ceremonies.  The west-entrance porch was added in 1905.

For the first half of the twentieth century, Founders Hall did not change much from these early alterations.  The basement of Founders continued to house some of the women students and allowed for easy access to the dining room in Oneida Hall.  The second floor, as the administrative center of the college, was always bustling with people.  The English Department was located on the third floor and the fourth floor housed additional offices for professors. Connecting all four floors were the circular center steps.

As the campus expanded, Founders Hall remained in its original condition.  However, by the late 1960s the building began to show signs of structural instability.  A President’s Development Council was commissioned to advise on whether to renovate Founders Hall or tear it down completely.  The overwhelming majority of committee members advocated that, in the practical and economic interest of the college, Founders Hall be torn down and replaced by a completely new building.  However, the symbolic importance of Founders to the Juniata campus ensured its survival.  In 1979, the History, English and Philosophy Departments relocated and the building underwent a series of structural renovations.

On June 16, 1978, architects Schafer and Slowick wrote to Juniata President Fredrick M. Binder describing the condition of Founders Hall.  They found that the moisture penetrating through the brick and outer joints was putting unnecessary stress on the building’s walls.  To fix the problem, they recommended reinforcing the steel framing, replacing the bearing plates, adding a new roof and new gutters, and replacing any damaged windows.  The entire project cost $289,266.07.  Even with the new renovations, the building could not stand up to everyday use.  The original steel rods, which supported the top two floors, were causing the brick walls to bow out.  When Founders Hall reopened in 1980, only the ground and first floors were occupied.

In 2008, the college decided to undertake yet another renovation, this time with plans to completely reconstruct Founders Hall.  However, the builders remained conscious of preserving the history of the building, while still making it more functional.  The east-west wing was retained, although new glass-enclosed lounges and conference rooms were added to the east side, where the stairwell had been.  The north wing was completely torn down and replaced by a transitional section.  Architect Baird Dixon, of Nashville, Tennessee saved the iconic bell tower and the beloved 1905 entrance porch.  The tower was steel-reinforced, ensuring a sound structure.  The entire project cost 8.5 million dollars to complete.

The building itself was awarded a LEED Silver designation for being environmentally friendly.  LEED certification provides verification that a building was designed and built to match a set of strict national sustainability standards.  In its construction, Founders Hall is built from products such as recycled rubber, renewable cork, renewable bamboo veneer, and recycled lumber.  The building runs on a geothermal heating and cooling system and exhibits a variety of energy saving measures, including waterless urinals and low-energy lights with motion sensors.  In terms of reusable technology, a new gutter system collects rainwater and redirects it into several larger reservoirs where the water can then be reused.

Inside, Founders Hall boasted a new floor plan.  The ground floor houses the College’s advancement staff and acts as the building’s mechanical and electrical nerve center.  On the second floor is the Registrar’s Office, the Dean of Student’s office, Academic Support Services and the Juniata History Room.  The third floor is home to the history department faculty along with the offices of the President and the Provost.  On the fourth floor are the English department faculty offices and four classrooms.   Outside the building, a fountain and outdoor classroom were added.  The renovations, completed in 2009, brought Founders Hall back into the everyday lives of the students, ensuring that its iconic place at the center of campus continues.