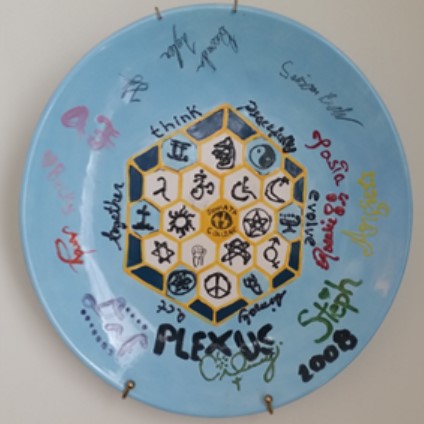 A program for increasing cultural awareness and supporting under-represented student populations. Plexus is an umbrella term for three different things: the Plexus Inbound, Plexus Club and the Plexus fellowship. All three of them have different functions and purposes, but their creation stems from one thing: cultural awareness.

In the spring of 2004, Marisa Gunn, Juniata alumnus and intern for the Office of Diversity and Inclusion, came up with the name “Plexus” back when there were eight participants. Gunn drew on her background in science for the name as plexus is defined as a combination of interlaced parts, or rather a network.

Plexus started off as only a three-day orientation at the beginning of the school year for the purpose of making students aware of the resources that were available for students from under-represented communities. When the Inbound Program began in the fall of 2004, Plexus became one of the Inbound group options. The Plexus orientation was also a model that would lead to a support network for marginalized and minority students who live far away from home, and the LGBTQ+ community. Thus, making students who do not fit the Christian, Caucasian, straight criteria majority in Huntingdon, feel safe and comfortable.

Rosalie Rodriguez was the Special Assistant to the President for the Diversity & Inclusion Office on campus at that time. She later oversaw the implementation of the fellowship program for three years and quickly began to recognize a lot of value in it for students.

Rodriguez left Juniata College in 2010 to pursue graduate school and came back in 2012. Her first project upon returning was the establishment of the Plexus Fellowship. The Fellowship sought to create an extended relationship version of the short-term orientations that had been in place since 2004. The creation of the Plexus Fellowship required extended research of venturing program as well as mentoring programs. A program called POSSE from the University of Wisconsin-Madison did similar things; it would take groups of high school students and place them together. The college would provide full tuition and room and board. Rodriguez wanted to model that kind of support system to a similar extent; she wanted to help and support those students who could become strong leaders around campus, those who can be very strong in leadership, but did not have enough exposure in the transition into college.

As a result, Rodriguez and others designed the Plexus Fellowship specifically for students who have a lot of potential, but did not have the means to put it into action. The model addresses students’ intellectual, physical, spiritual and emotional needs. They hoped this approach would increase retention of the students that will match the retention rates of their peers by focusing on developmental areas: academic excellence, vocational exploration, civic engagement, financial management, leadership development, and wellness.

However, Juniata did not have the funds required to pay full tuition for the selected students. Instead, Rodriguez made a proposal that included ten mentees and mentors, and consequently, Juniata put it in the form of a scholarship that would be awarded to the ten students each year for the four years they attend Juniata. The plan was to extend it to twenty-five mentees and mentors in five years. The students selected had to come from the following criteria: low-income families or first-generation students, who did not have a role model that had gone to college. The purpose being that first-generation students feel less academically prepared; are less likely to participate in co-curricular activities and extracurricular activities; and exhibit a lower level of interaction with peers and faculty. The students selected particularly struggled financially. They were chosen to give them the tools necessary to persist and utilize the different resources that were available.

After Rodriguez, Lindsay Monihen became coordinator for the 2014-2015 school year. She believed that the phrase “it takes village to raise a child” could easily apply to student development and mentoring. It truly “takes a village to support a student.” Looking back from her experience at Juniata she wrote, “Even as I departed from Juniata College, I was impressed by the institutional support for the program and expansion for diversity.” Monihen still continues to pay forward her gratitude towards mentoring.

In 2015, an alumnus of the Plexus fellowship, Skukura Woods took the helm of the growing Plexus program. She wrote, “With over 30 students now participating in various capacities, the Fellowship is moving toward a 4-year program focused on holistically developing emotional intelligence and the leadership and professional skills needed to succeed through college and beyond.” In addition, Woods added, that  “workshops and group bonding activities” remained vital elements in supporting “each student by fostering this unique, physical support network of students and administrators.”

Finally, the Plexus Club was created in 2006 and it was student driven. Sofia Suarez was the initial student president for it.  Around that time, there was no club available that was dedicated to social justice work. The Plexus club created workshops and going to conferences.  The past few years have not been very active for the club, members were lacking and the thought of letting the club go became a strong possibility. In 2014, junior Mason Sherry took the position of president and is currently holding that position.  The club is active in diversity workshops and conferences. They helped fund the “Not your parent’s Civil Rights movement” talk at Juniata which was part of the Black Lives Matter movement, featuring the Ferguson Frontline. They also sent care packages to families in Syria and received photos from the people they sent them too.